I’ve taken the day off work today (Friday 23rd February) to come to the Republic of Ireland for a weekend doing Summits On The Air (SOTA).

Of course, walking up hills at this time of year is unreliable in terms of weather. It’s especially a risk if you have to book flights in advance, as I did for this trip. It could have been terribly wet, or the roads could have been impassable. The SOTA award recognises the problems of activating during winter by giving extra points as Winter Bonus points to people who go up mountains.

The Wicklow mountains stand out on the SOTA map, as there are loads of 10 point mountains (the highest) in a small area of each other, making them apparently good options for a run collecting a load of Winter Bonus points. And that’s exactly why I chose these mountains for this trip.

The weather has indeed been the main thing I’ve had to battle on this trip. It has been dry today, but the wind has been biting and relentless. A Southerly is normally a warm direction, but today it is coming down from Siberia, across continental Europe, down the English Channel and is then making a sharp turn to the North over the Republic of Ireland. The resulting wind chill has been down to -8c.

Having flown into Dublin last night, staying at the Premier Inn at Dublin Airport (which is comfortable enough), I picked up a rental car this morning and headed straight for Kippure. This is one of the nearest 10 pointers to the capital city, and is the site of the main TV transmitter mast for the area. It’s a really easy way to get 10 points. Having driven about 40 minutes from Dublin airport (Note: You’ll need to pay the M50 Toll for the ringroad), you leave you car in the layby, and then walk about 3.5kms up the tarmac access road to the mast. This took about 45 minutes for the ascent and 30 for the descent, much quicker than I had projected.

A sign at the bottom of the road warns that you should not approach within 200m of the transmitter mast due to the potential of falling ice. With the weather so cold, I considered this a realistic danger, so as soon as I was within the activation zone, I stopped and set up the station just off the road. The wind made the set up quite slow but I was relieved to hear a call on my 2m handheld from GW4TQE/P and GW4VPX/P on SOTA GW/MW-011 while I was still sorting out the dipole, so that gave me my first two QSOs.

As soon as I was ready on 30m CW, I quickly got a number of callers thanks to the SOTA Reverse Beacon Network gateway (a system that automatically decodes callsigns from Morse Code, checks whether that callsign is expected on a hill soon, and if so, alerts everyone immediately). Ten stations from across Europe were worked on morse code in this way. 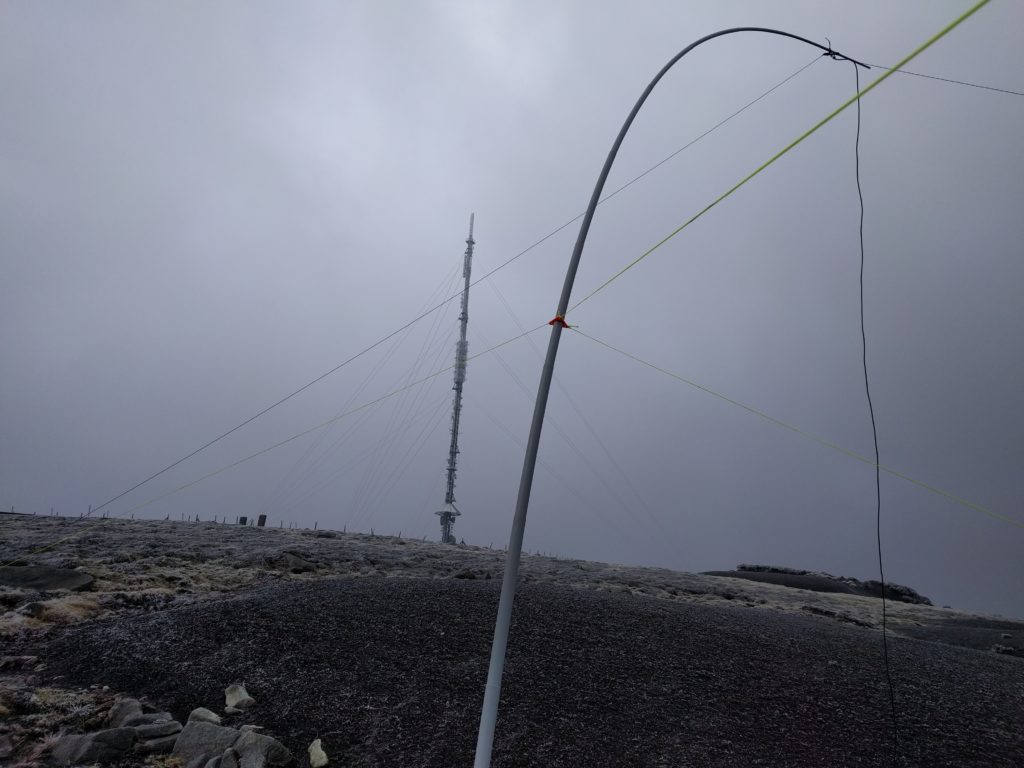 Given how easy this summit is, I was amazed it had only been activated 15 times before me.

I was back at the car by 12:00, about 2h15 since I had left it, and about an hour earlier than I had expected. It was then a short 20 minute drive to the next mountain, Tonelagee.

One word of warning – when researching this trip, several sources mentioned that car break-ins are common at Kippure, and indeed there was plenty of broken glass in the carpark. I suspected I was OK on such a cold day as nobody in their right mind would have been out, but I would have had more concern about the suitcase in my car on a warmer day.

Tonelagee is another easy way to get ten points plus Winter Bonus, but it has barely been activated more than Kippure. Just 20 activations before mine. There’s no tarmac access path this time but it’s one of those hills where you get out of your car in a car park at the bottom and basically head straight up. The path is hard to distinguish in the flatter area around the carpark but you’ll soon pick it up if you head in a straight line. That flatter area is incredibly boggy with heather outcrops, so you do need to watch where you are walking. Even when you start climbing, the boggy conditions continued to about 550m ASL, where the slope becomes a little more pronounced. 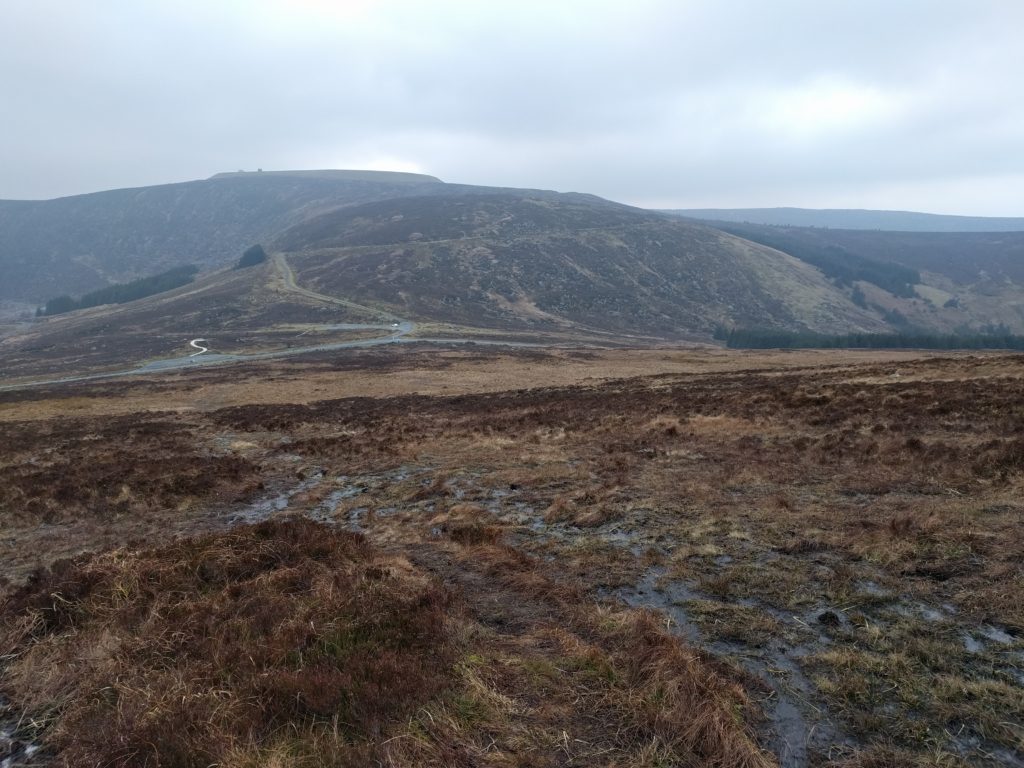 The lower part of the ascent of Tonelagee, looking down to the carpark. The path is barely visible and boggy!

The next 100 metres of climb were pretty pleasant, but around the 700m point, there was a very hard frost on the ground. The walking became harder as it was a mixture of frozen puddles and hard bog. At least the wind was behind me for most of the ascent. It’s worth noting that the carpark is visible below you until you are almost at the summit – something I always find reassuring for navigation. 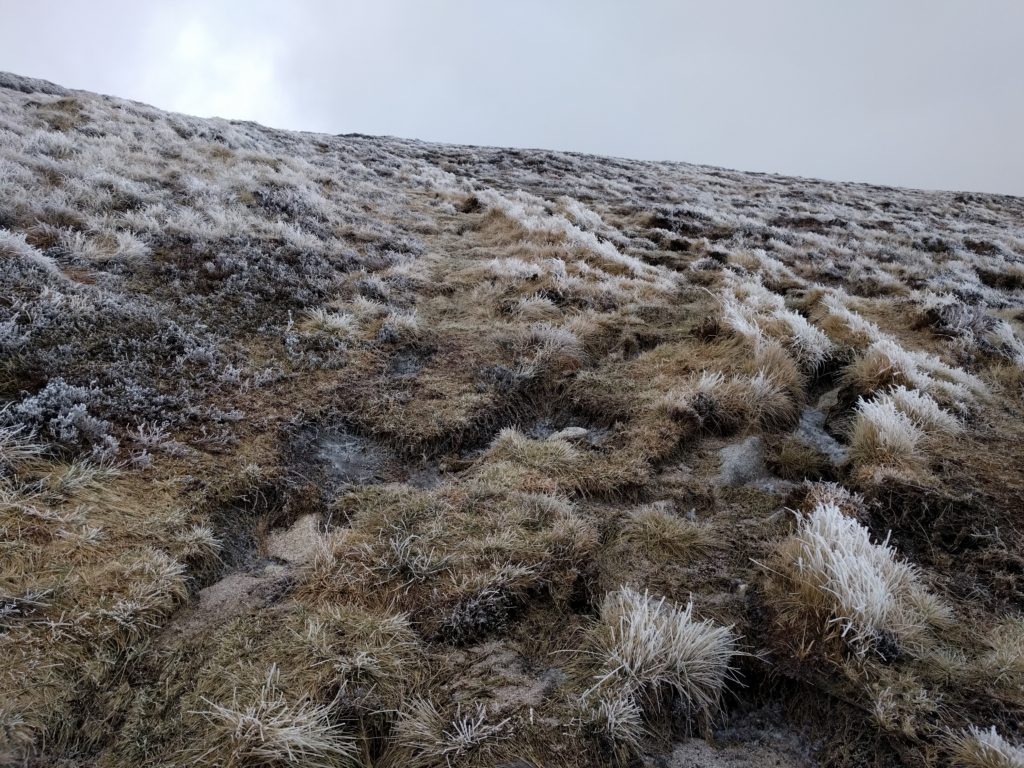 Tonelagee has a pretty flat top, meaning there’s a sizeable activation zone. Although it is mainly barren, I found a useful stone shelter where I set up the station out of the wind. It was actually fairly comfortable when I was crouched down operating behind the stone, but the SOTA pole bent almost at right-angles was a continual reminder that it was not so good beyond my little cave… and that was with the SOTA pole not at full height. 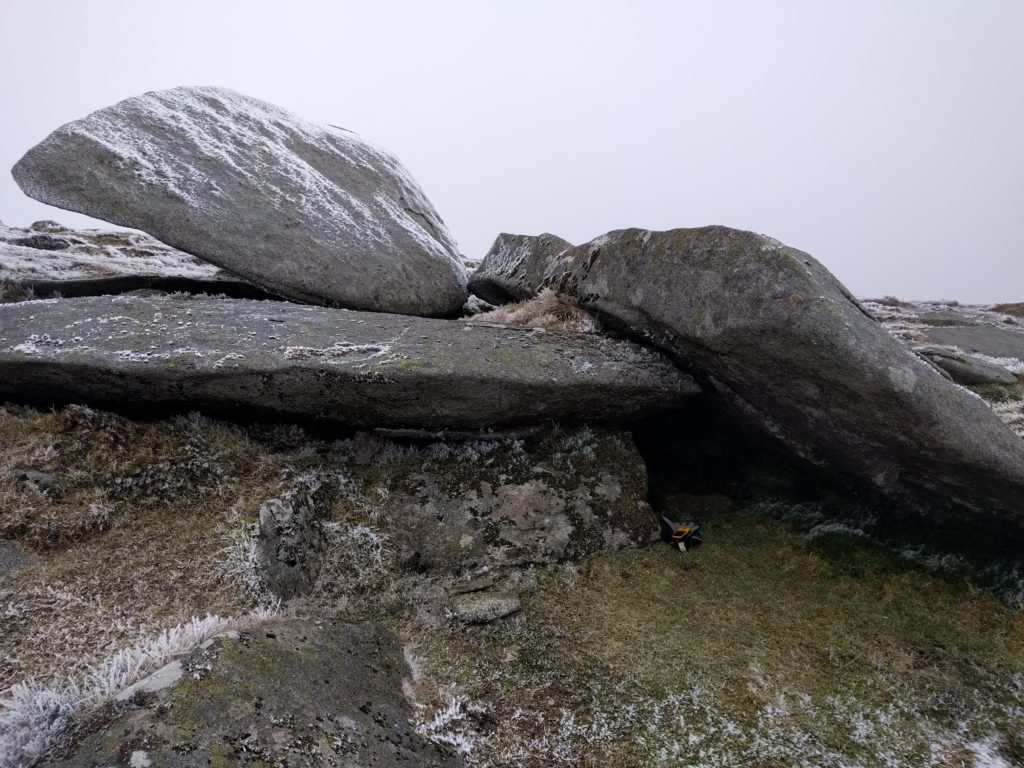 The handy shelter I found on the summit of Tonelagee

I had enough shelter to get nine stations in the log on 30m CW. I did call on 2m FM but didn’t hear any replies (which was lucky, as I would have had to stop crouching behind rocks).

By way of indication as to just how cold it was, my smartphone shut down on the top while taking a photo, presumably with voltage drop (batteries don’t like the cold). As soon as it was back in the relatively warm car, it booted up again with 60% battery remaining. Yet another reason not to rely on mobile phones when hiking.

Again, I did this one much quicker than expected. The walk took a similar amount of time to Kippure – about 45 minutes up and 30 down, meaning I was in the warmth of the car just after 3pm.