This post is part 2 of a series of three posts about my time doing SOTA in the Wicklow mountains. For part 1, see Wicklow Mountains SOTA Trip: Day 1 – Kippure and Tonelagee.

I’m staying at Tudor Lodge B&B in Laragh, just outside Glendalough, which is near to many of the mountains I’m climbing. It’s a lovely B&B. When I’m on these walking trips, I tend to have a large cooked breakfast, and then skip lunch, and then I will have a decent meal in the evening. The full Irish breakfast at Tudor Lodge certainly fits the bill, and Laragh’s Wicklow Heather restaurant has excellent fare for very modest price, so the location is working well for me!

The breakfast meant that I left Laragh slightly later than planned, and headed about 20 minutes up the road to Djouce. This is another mountain that is worth 10 points plus winter bonus for SOTA, but like yesterday’s hills it is quite easy.

Having parked up in a layby at NGR O 169073, and then going through the thin line of trees beside the road, you quickly pick up a small path which in turn connects into the Wicklow Way, a major long-distance footpath. To reduce erosion, the Wicklow Way has been fitted with a boardwalk to railway sleepers covered in chicken wire. This makes the walk easy, and there’s little risk of going off-course!

Soon after picking up the boardwalk, there are some wonderful views of Lough Tay, although it wasy quite hazy today. 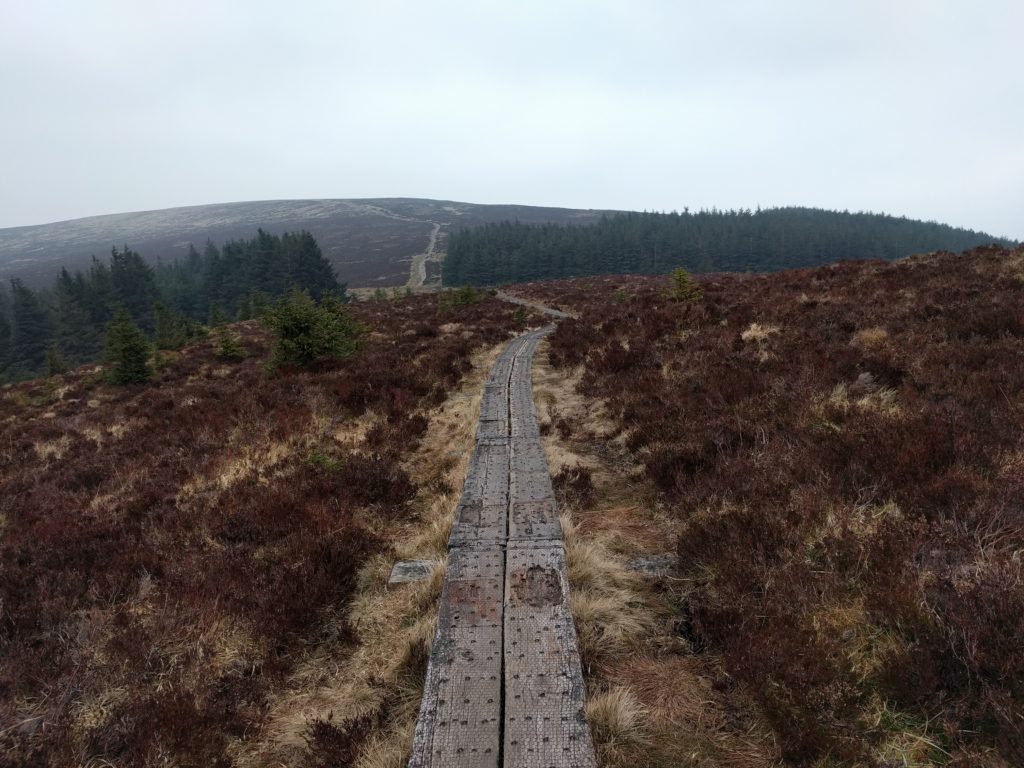 The boardwalk forming the Wicklow Way to Djouce 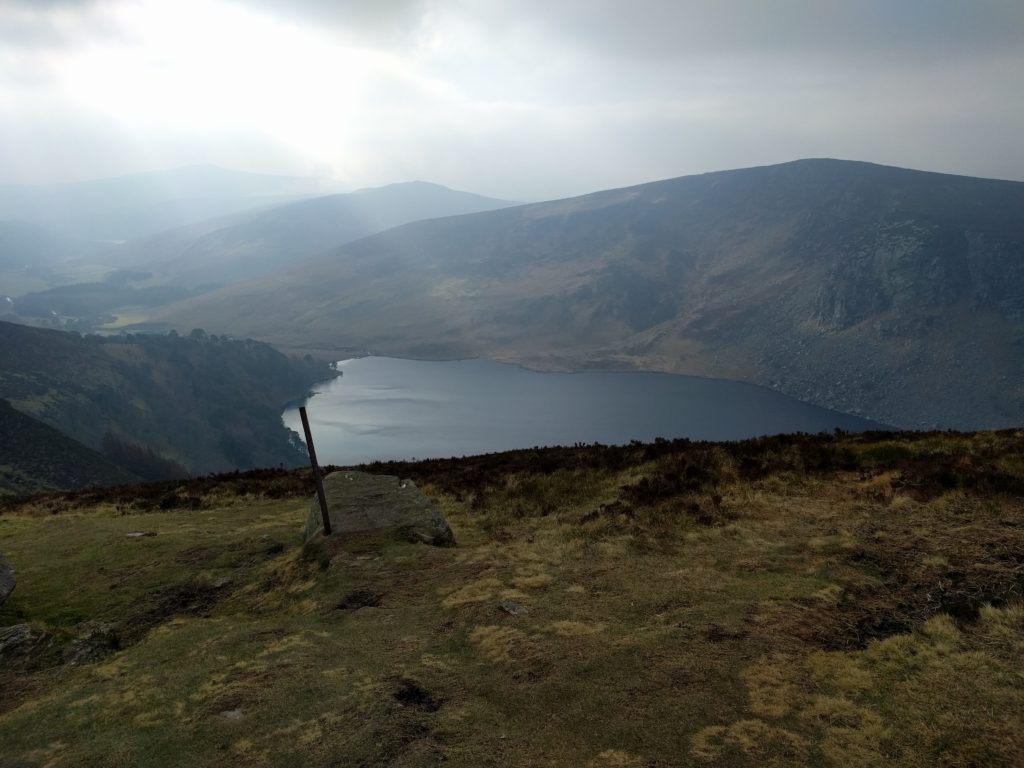 After the ascent of White Hill (630m, not a SOTA summit), the path descends a bit, shortly after which Djouce comes into view. The boardwalk continues most of the way towards Djouce, but turns at O 178097, where the Wicklow Way skirts the side of Djouce, continuing northwest. Leaving the boardwalk at this point, an easily visible track takes you to the summit. 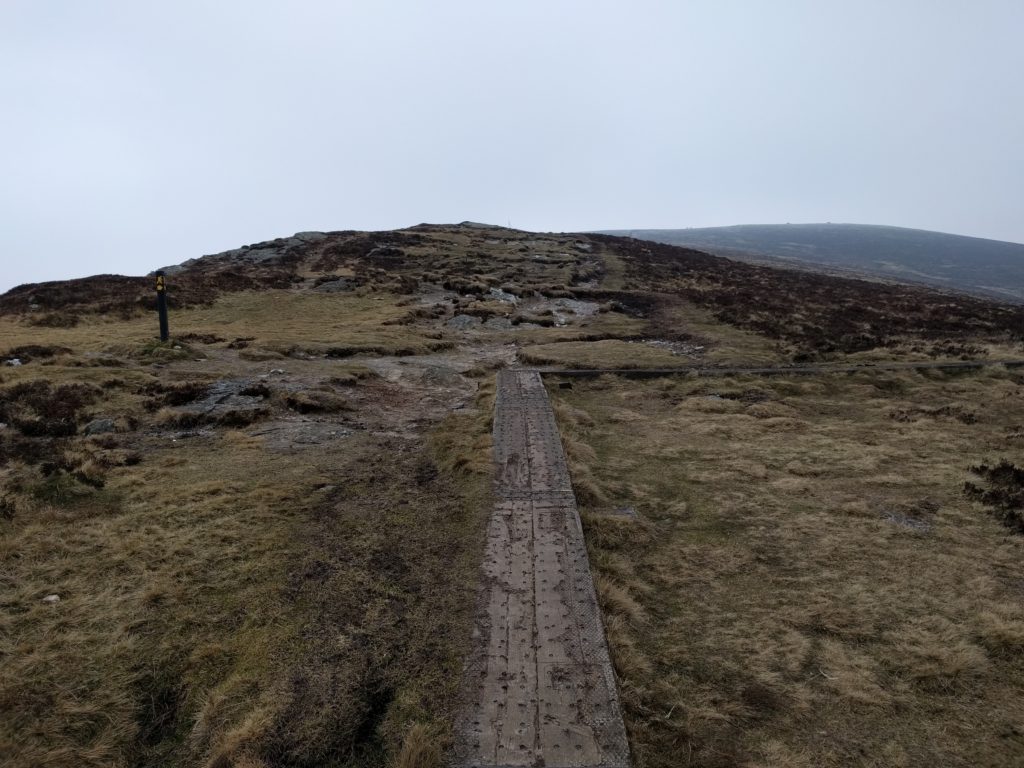 Where the boardwalk turns to skirt around Djouce, continue straight ahead

This is a very easy walk and at no point is it particularly steep.

One of the things I’ve often found, however, is that there are some SOTAs that are easy climbs but then the radio activation is hard. Today, this was one such mountain. With the cold wind not much better than yesterday, I initially opted to take shelter behind the trig point and set my equipment up there. However, very quickly, more and more people started to arrive, all of whom (understandably) wanted to take shelter there too. I soon moved to another location nearby, where I could get a little shelter.

A quick call on 2m didn’t get any callers, so I soon started setting up on 30m. Trying to get the aerial to stay up in the wind was a problem, however, particularly as there were no useful rocks to tie off onto, and the ground was so frozen that I couldn’t get tent pegs into the earth to guy the mast. After about half an hour of faffing, I eventually decided to make do with keeping the SOTA pole low and just using the dipole as guys, me holding the coax as the third guy. This worked enough to get 8 CW QSOs, so comfortably enough for the activation. 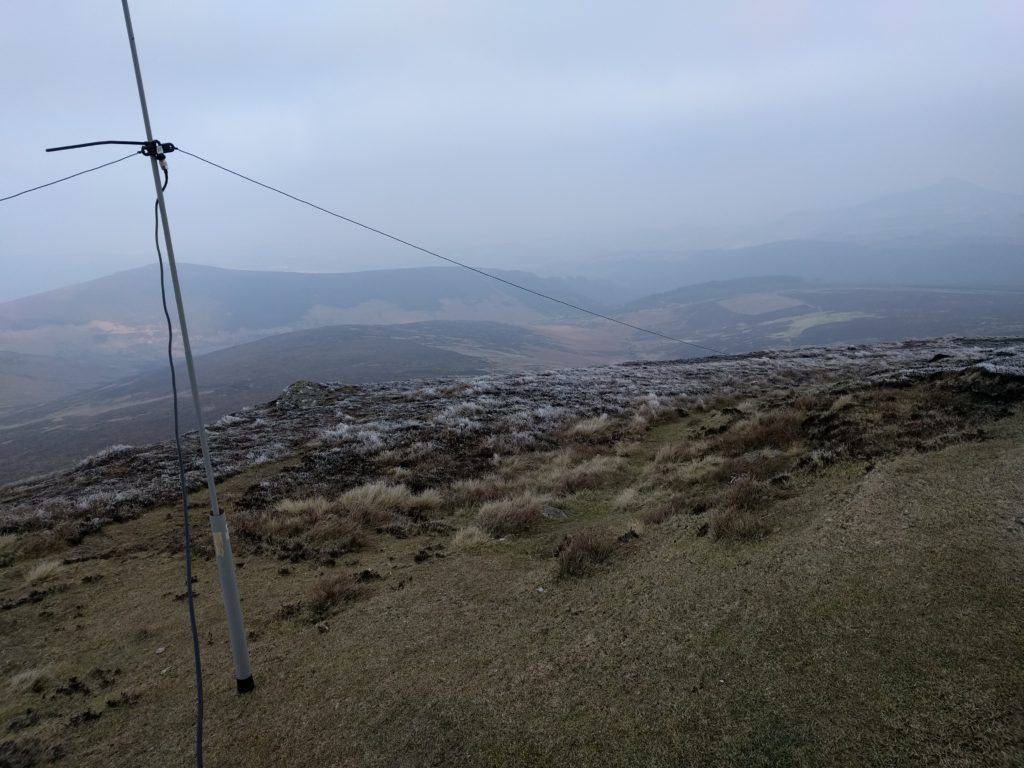 Low SOTA pole over the frozen ground of Djouce

The ascent of Djouce took almost exactly an hour, and the descent about 45 minutes.

Although the SOTA scoring is based purely on mountain height, not difficulty of the climb, I’m sure many activators like me have an idea of what a hill ‘should’ feel like for a given points value. The previous three mountains were certainly among the easiest ten pointers I have done (outside Belgium, which is a different story). Trooperstown, however, felt more like the 4 pointer it is.

Trooperstown Hill is only about ten minutes’ drive from Djouce but part of the reason for it being a decent walk is that you start from just 150m ASL in the carpark at O 160969. This means that there are almost 300m to climb.

From the carpark, you follow the winding tarmac road through the pine forest. At the t-junction, turn right and head towards the local TV repeater mast. 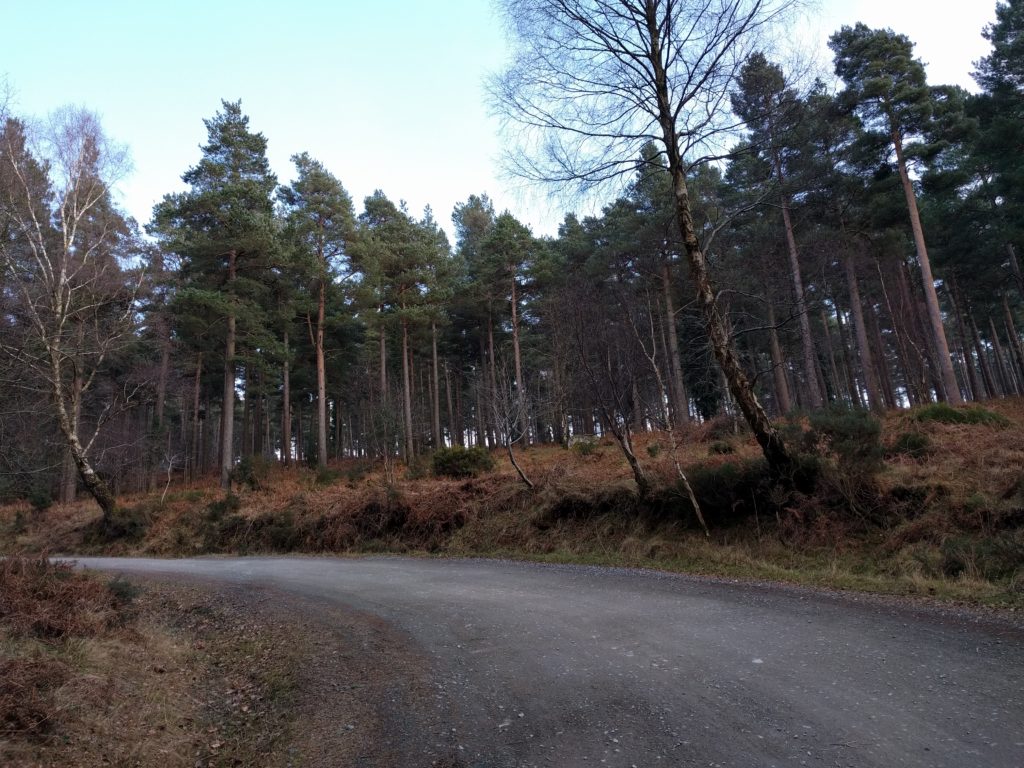 Road heading through the pine forest 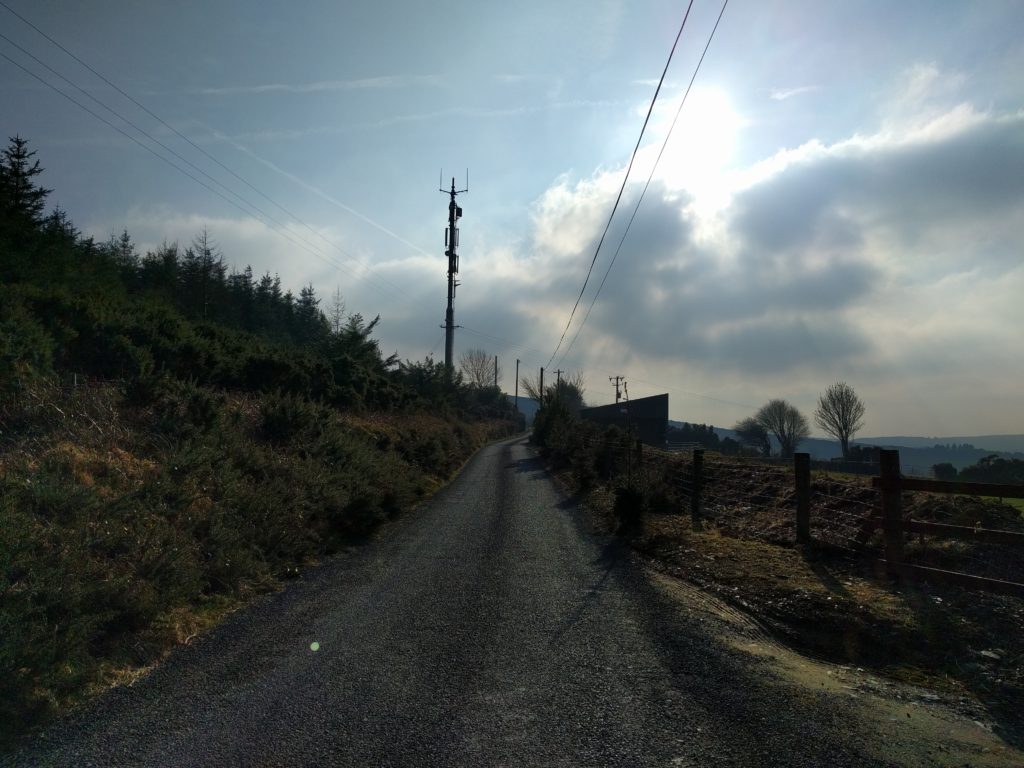 Immediately after the mast, head through the gap in the gorse bushes to get your first view of Trooperstown Hill and the various paths that head to its summit.

The main path starts off as a gentle grassy path but soon switches to a rather steeper path of loose rocks and stone. The steepness wasn’t impossible, and it certainly isn’t a scramble, but it was enough for me to be glad of my hiking pole on the descent. This continues most of the way to the top. 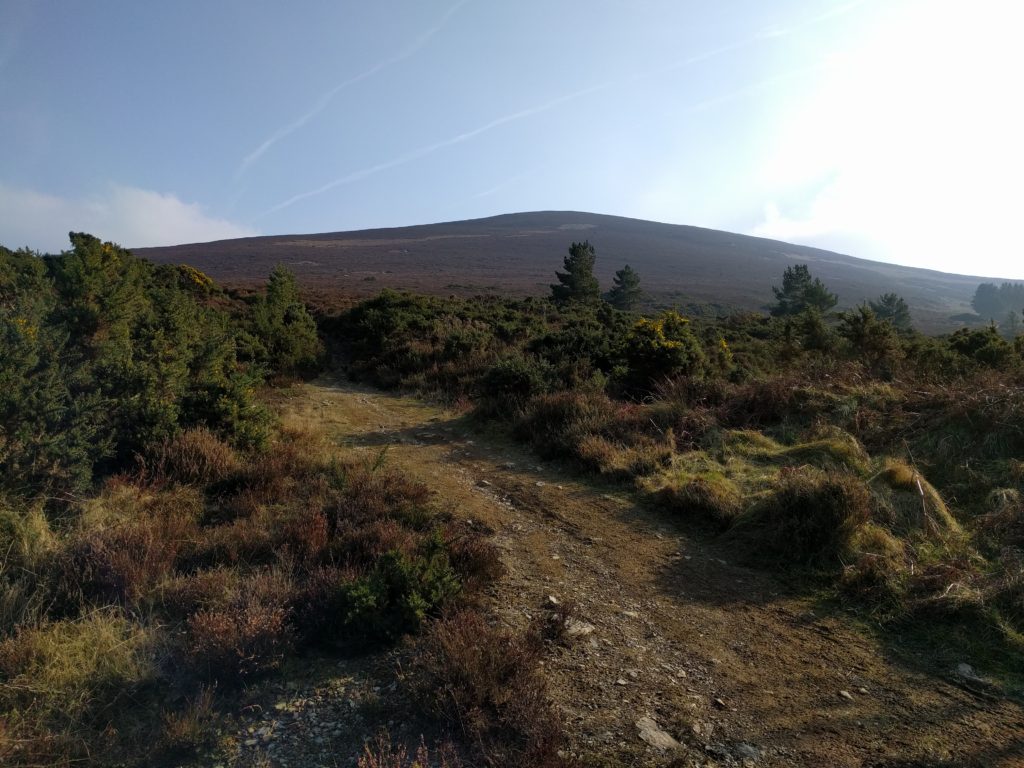 The lower part of the climb up Trooperstown: gentle grassy path 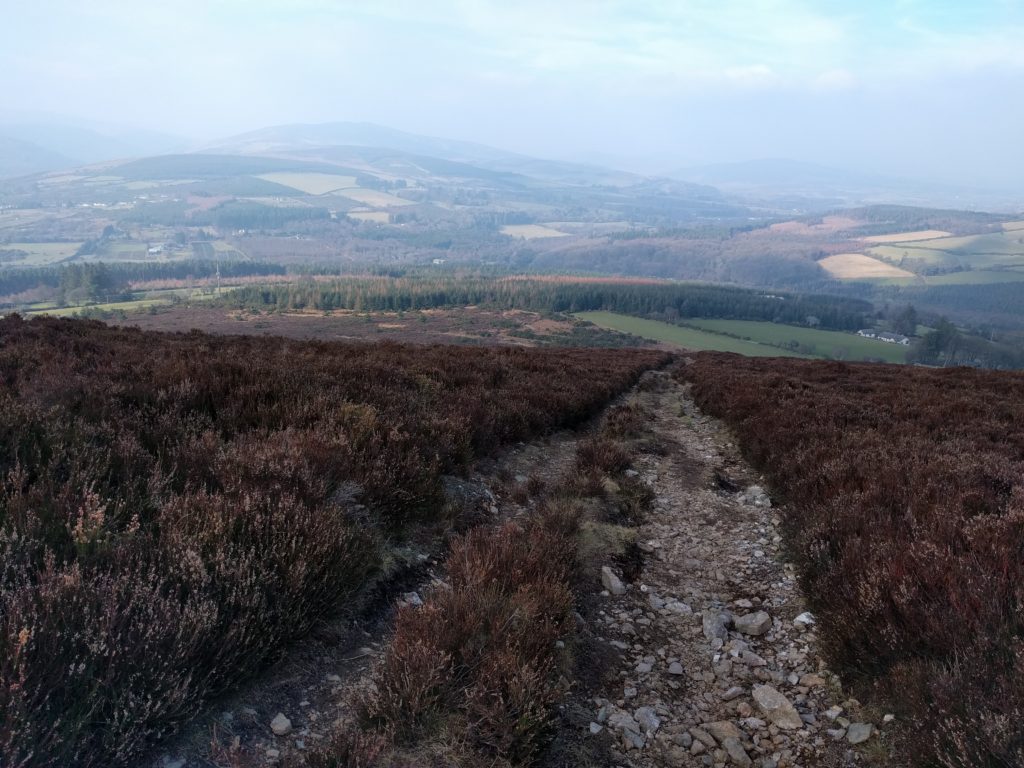 The higher part of the path up Trooperstown: steeper, loose stones

The summit itself is quite flat, giving lots of space for operating, and unlike Djouce, I saw nobody at all, either on the walk or during the activation.

The activation was much more pleasant than Djouce because the wind had dropped unexpectedly, and the sub had started to come out, making this a much more comfortable activation. The lower elevation also meant there was no problem getting the guys into the ground in the heather around the trig point. After one quick QSO with GW0PTP on 2m FM, the other twenty QSOs I made were on 30m CW, including a SOTA-to-SOTA with HB9BIN/P on HB/SO-015. 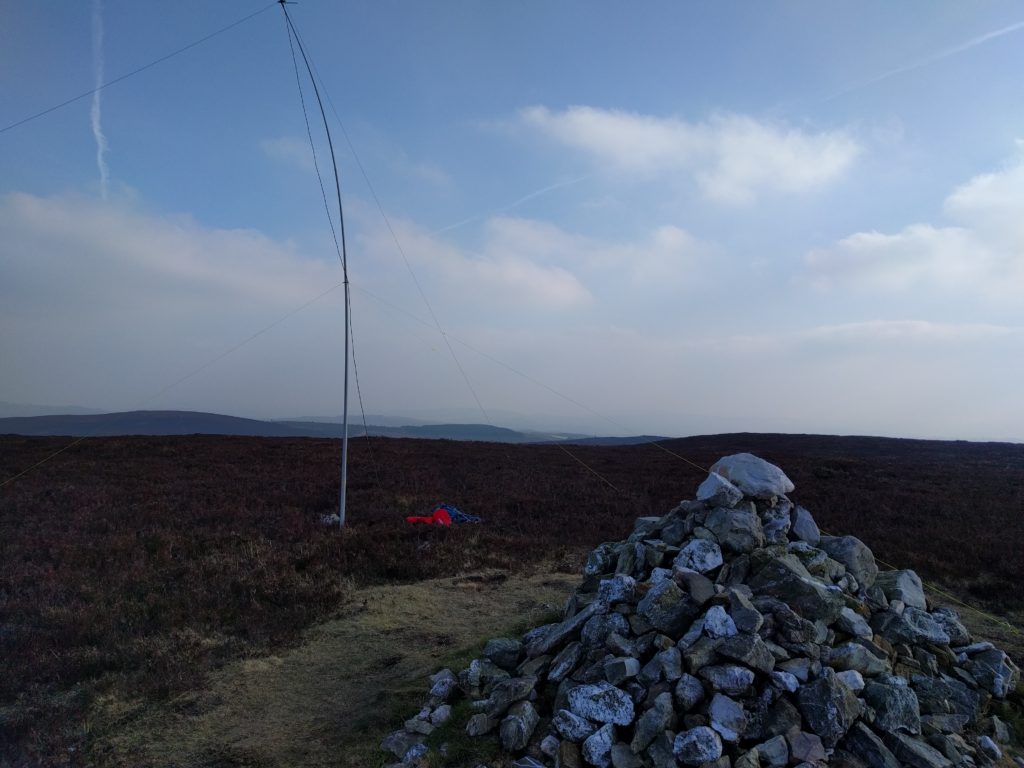 Operating location on Trooperstown, with antenna behind Cairn

The walk up took about 50 minutes, and the descent about 30 minutes.

All-in-all, this was a very nice little hill to operate from but be aware that in the EI association, four point summits do not get winter bonuses. Only six points and above do.