I’m starting my journey in Iquique, a city about 100 miles south of the Peruvian border, in the North of Chile.

My guidebook tells me that Iquique once had the highest consumption of Champagne per capita anywhere in the world, such was the boom the city went through in the late 19th century, after nitrates had been discovered here, and Europeans had come to exploit the mines. It also used to be a Peruvian town, but the whole area was won from Peru in the 1880s following the War of the Pacific.

There’s still quite some evidence of those heady days, with a number of older, ornate buildings dating from around the time of the annexation. 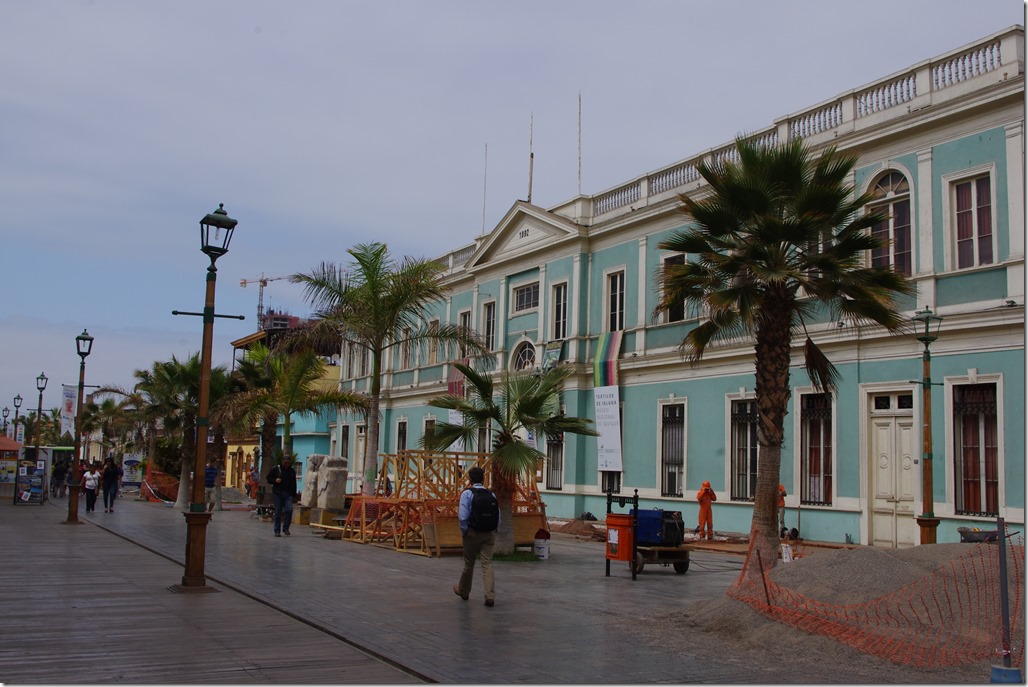 One thing I wasn’t previously aware of was that Croatians seem to have formed a significant part of the immigrant community here, although I haven’t been able to ascertain whether this was related to the mining. Not only is there a monument listing all the Croatian surnames in the town on the seafront, but the Hrvatski Dom (Croatian Club) is very prominent in the Plaza Prat – the main square. 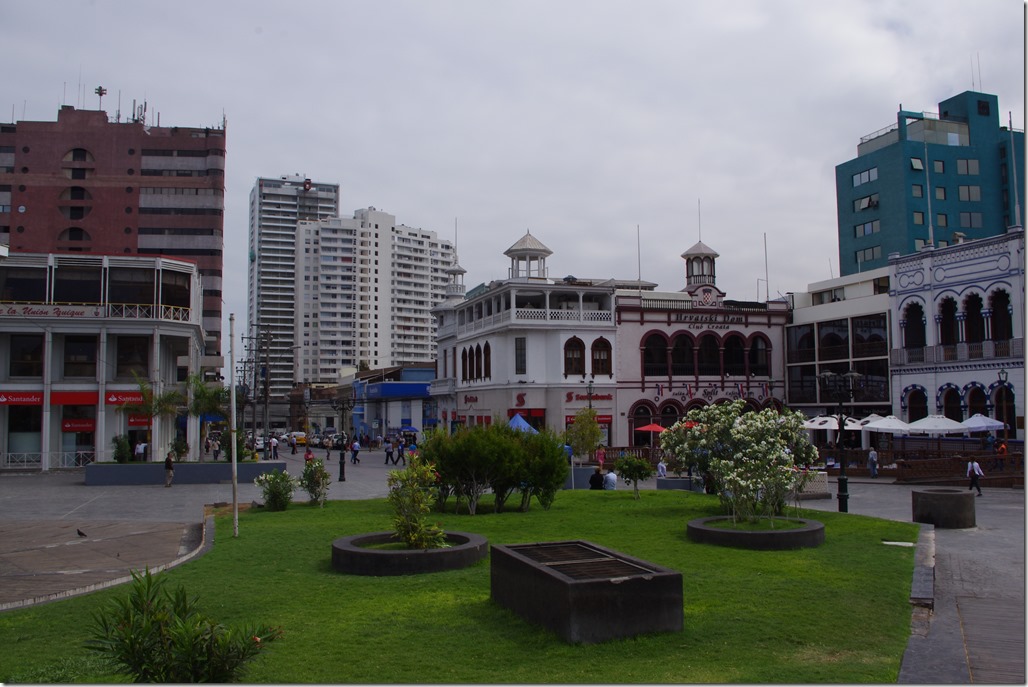 Iquique today is a port town, but it’s clear the nitrate days are long gone, and the town is focusing more on tourism. You don’t have to go far from the most touristy areas to find dilapidated old buildings left to rot alongside roadworks and shiny glassfronted modern hotels. (Indeed, I’m staying in one of them, having opted for the luxury of a Holiday Inn for my first couple nights after so many flights. 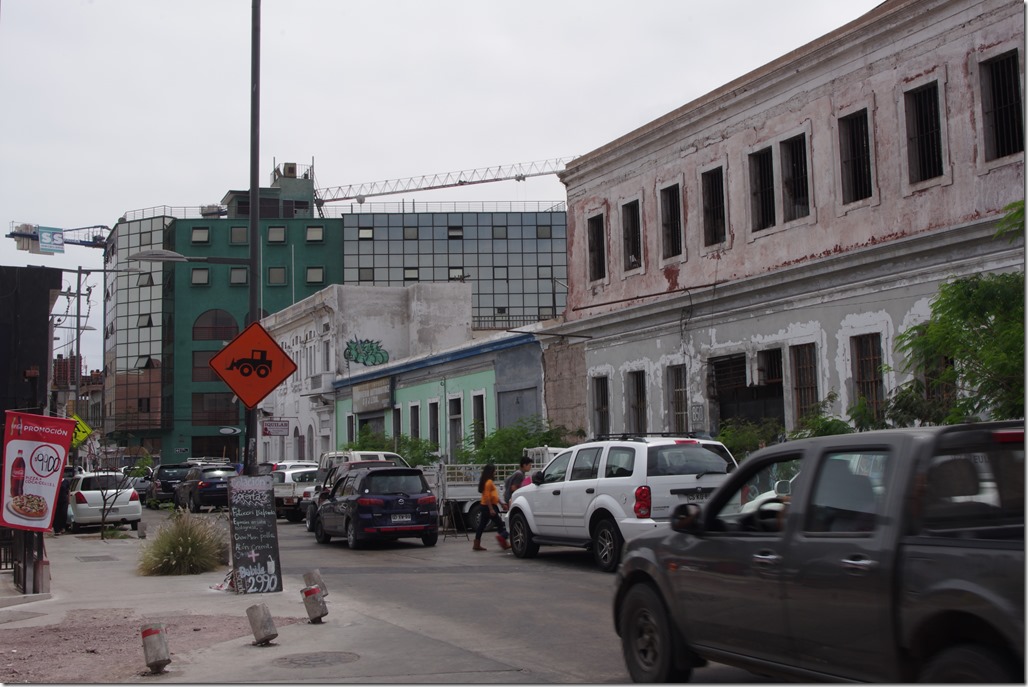 After spending a few hours wondering around and exploring the town, I headed to the beach to spend a half-hour before the strong sun sent me back to my hotel room. The beach is a wonderful gem, however – almost deserted in November with fine, white sand. Once the sun had burnt off the morning haze, temperatures quickly increased. 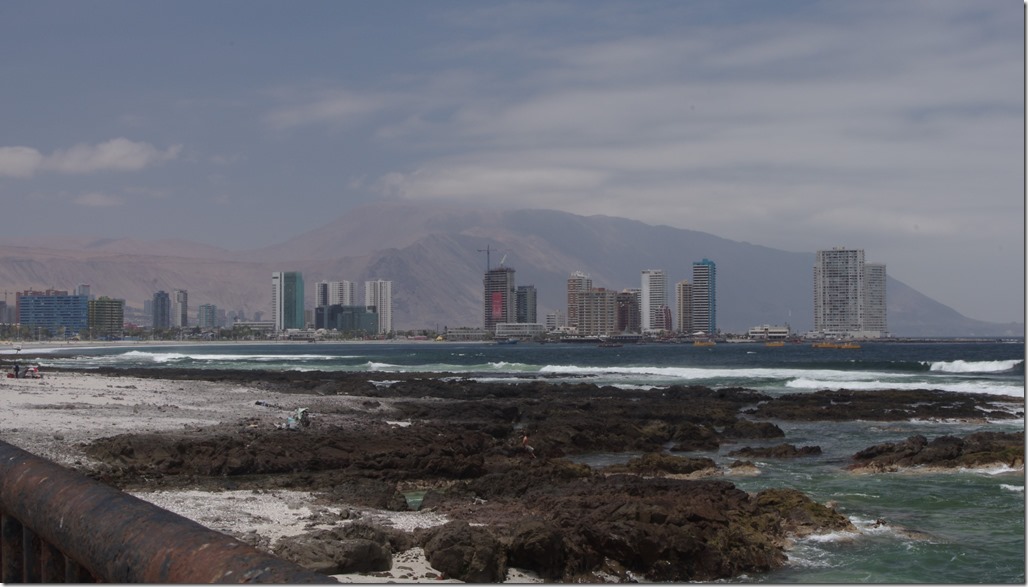 After a rest, it was time to go out to dinner. I chose a simple looking restaurants with Chileans eating in it, fairly near to the hotel. There’s no way you’d get away with calling a restaurant El negro Jose in Britain in 2015, but the name didn’t put me off. The meal was indeed simple – my Salmon Frita turned out to be a huge slab of battered salmon, served with an equally large side salad of skinless tomatoes and sliced raw red onion. It was nourishing, though, and the size was perhaps not too surprising for somewhere that also sells pizza by the metre!

The strangest thing about the meal was that it was interrupted by a crowd of about a dozen worshippers processing down the street with a megaphone shouting for the Virgin Mary to pray for our souls. One gentleman at the back was processing carrying what looked like the frame of a table, with no table top. The waiter said they do this as a circuit every Tuesday from about 12pm to 8pm.

An early night tonight as I have to get to the bus station by 7:30am tomorrow for my bus to Calama.

One thought on “11th November: Iquique”