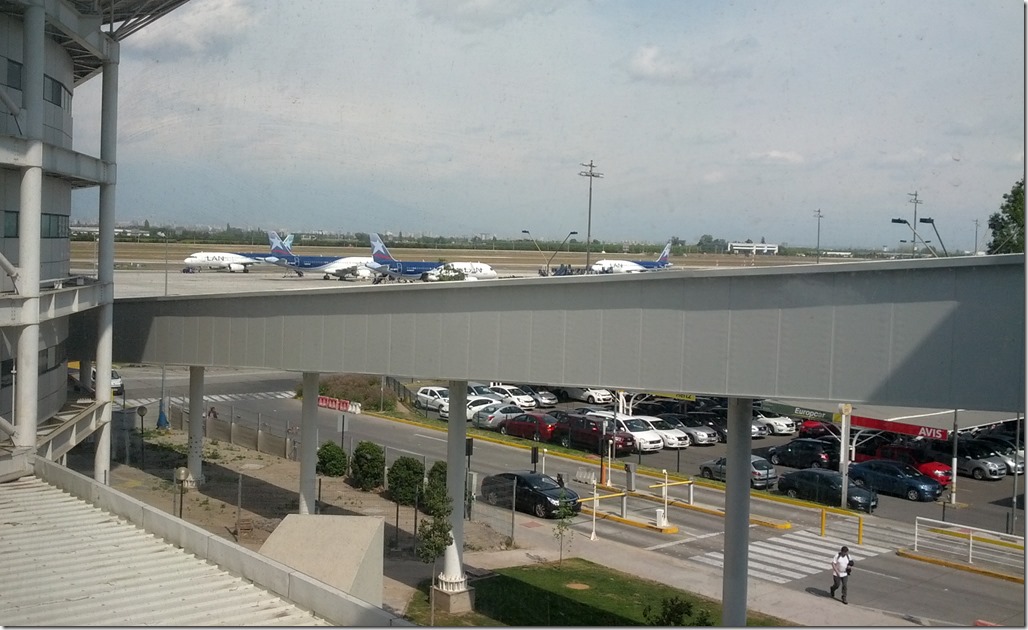 As predicted by my itinerary, today has been a pretty boring day, with far too long spent in airport departure lounges.

The trip to Iquique involves three flights: London-Madrid, Madrid-Santiago, Santiago-Iquique. Unfortunately flight availability conspired against me, even though I booked the flights in March, and so each of the connections was incredibly long. All in all, the journey has taken 36 hours.

The first notable thing about this leg is that today was Remembrance Sunday, and I found myself at the head of the Bag Drop queue in Heathrow Terminal 5 as the clock struck 11. I have to say, I was very impressed by the way BA handled the event. They stopped any new people from going to the desks from about 10:57, to ensure that all the Bag Drop desks were clear by 11am. The whole airport fell remarkably silent – almost eerily so – for two minutes before the Last Post was played over the PA system, and the usual organised chaos resumed.

Less impressive was BA’s handling of my Check-In. The previous day, I’d had an email inviting me to check in online for the London-Madrid leg, which I duly did. Now, I consider myself a seasoned flyer but transferring to a codeshare flight is new to me. Suffice to say, when I tried to check in for the Madrid-Santiago leg, the system failed and I was told to get my boarding pass at the airport. Fair enough. When I got to the airport, however, the staff there told me that because I’d tried to get a Boarding Pass, they were now locked out too, and so I’d need to get the onward journey’s pass in Madrid. That wasn’t a problem, but I was somewhat amused that I was meant to have guessed that the original email invitation didn’t apply to connecting passengers.

There was no problem getting the Boarding Pass at Madrid, and the connection was quite straight-forward too. The security desk for re-screening transferring passengers was almost deserted ,which meant that there was time for the Iridium Go! Satellite tracker/phone that I was carrying to get a bit of extra attention. Apparently the security staff hadn’t seen one before. Finally, I stopped off in Burger King for a quick airport dinner. Now, I know I’m not meant to think about work on my sabbatical but I’ve had User Experience too drilled into me to forget it that quickly. Come on, Burger King – tills with multiple slots in the front for taking notes, coins, cards etc separately, and other slots for giving change are far too confusing for tired airline passengers. I wasn’t the only person struggling with them. What’s wrong with your staff, you know, taking money and putting it in the till like everywhere else?

One nice thing from a personal point-of-view was that, sitting at a window seat in the half-empty plane, I got some lovely views of the Landes coast and was able to identify some of the landmarks I remember from childhood holidays and my time working in that area.

This was a long flight – over 13 hours long. I managed to get a bit of sleep off-and-on, but I arrived in Santiago feeling noticeably tired.

There’s really not that much to report from the flight either. EC-KZI is an aging Airbus A340-600, still painted in the old-style Iberia livery. Economy is in a 2-4-2 seating arrangement, and I got lucky being in one of the 2’s at the side, meaning both a decent view out of the window after dawn, and easy access to the toilets. Anyway, it was all fairly boring. Indeed, the most interesting bit of the flight was during take-off: The cabin crew were experiencing quite some difficulty in playing the safety video, which appeared to be coming from a VHS cassette, as we could watch them rewinding it, complete with the tail-tale ‘snow’ left by the playback heads when rewinding! Anyway, they appeared to be really taken by surprise at quite how short the taxi was – they were still getting ready to show us where the exits were when the plane went to maximum thrust at the start of the runway, leaving them scurrying for their seats. If anyone hadn’t worked out how to fasten the seatbelts, we would have just been getting airborne before they found out! Of course, the cabin crew tried to rectify the situation by showing us the exits shortly after take off!

The flight itself was almost full, which was quite a surprise to me given that there seemed to be 3 flights to Santiago from Madrid, all departing within a 30 minute period, of which mine was the latest. Obviously a lot of people want to come to Chile!

One nice touch, which I haven’t experienced on previous flights with other carriers, was that there was a camera mounted in the tail fin, which allowed the crew to put a view of the landing on the screens.

Landing in Santiago was straight-forward. Immigration was speedy and my bag had made it from London OK. By the time I got my bag, there was a massive queue for Customs clearance. I knew that Customs was a potential issue from previous visits by radio amateurs who have had quite a lot of attention because of the gear they were carrying. One of the questions on the customs form defines typical luggage (one camera, one videocamera, etc.) and asks you to declare with a Yes/No answer if you have anything outside of the list on you. I feared my Yes answer could cause all sorts of delays, but there were so many people I was waived straight through. Hopefully this won’t cause a problem when I come to leave! 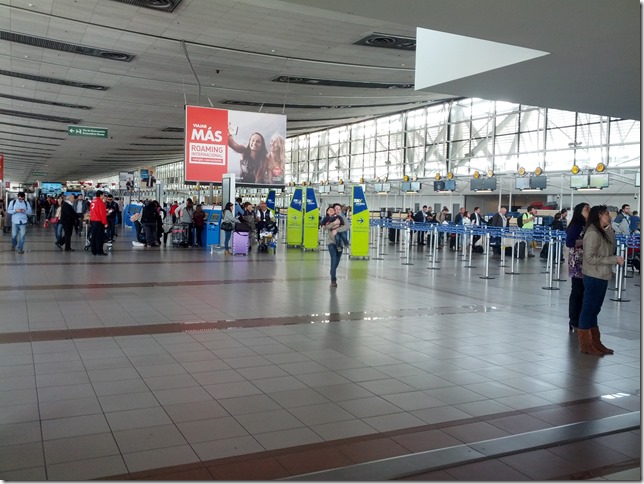 Getting bus tickets in Santiago airport

A note for anyone else planning a similar trip: it’s notoriously difficult for foreigners to get tickets for Chile’s long-distance bus services, as most online options require you to have a Chilean RUT (Tax identification number). While there are some internet services (such as recorrido.cl) that claim to be able to help, I’ve found that they don’t have a full selection of available services. What I’ve done, therefore, is to get my bus tickets for the first part of the trip from the Tur-Bus office in Santiago airport. It’s a difficult place to find (it’s on the ground/1st floor – turn right out of international arrivals and keep walking until you reach the end of the building). Once there, buying the ticket with a passport number instead of a RUT is straight-forward.

My final flight to get me to my chosen starting point for my itinerary was to head north to Iquique, just about 30 miles south of the Peruvian border. This was a spectacular evening flight. Shortly after take off there were breathtaking views of snow-capped Andes on one side of the plane, and the Pacific coast out the other. Sadly it was generally too hazy for this to last long, and night was falling too, but the sun set with the most deep blood red I have ever seen. Hopefully a good sign for tomorrow!

The plane itself was a new-looking Airbus A321. Sadly I didn’t get its registration, but my first flight operated by LAN Chile left me suitably impressed. They even managed to complete the safety video before take-off and, as a OneWorld member, they seemed to have the same flight-tracking software on their screens as BA do.

Iquique airport is about 30kms south of the city, and the taxi journey with the ‘official’ cab was $17,000 (or about £17). You can get it about four times cheaper with non-accredited taxis or by going in a collectivo (shared taxi).

I’ve been writing this blog post off and on in various departure lounges as I’ve been making my journey. I’m going to stop now as I’m tired from so much travelling. Apparently it’s 11pm local time, but I wouldn’t know what time it was without  a clock telling me. A good night’s sleep is in order before I explore Iquique tomorrow.