Having stayed the night at the very comfortable Cwmdu Campsite (only ten minutes’ drive from Mynydd Troed – where I  finished yesterday – and Mynydd Llangorse), I awoke to a very wet pitch. It had rained heavily all night, and I was aware that that rain would have fallen as snow on the summits.

I decided to wait for the rain to stop (which luckily it did, at around 9:30am), before I set out, meaning that I already started the day behind my planned schedule.

As its numbering suggests, Pen Y Fan is the highest of the Brecon Beacons, at 886m, scoring 8 points for SOTA. The main carpark is about a 40 minute drive from Cwmdu and, despite the weather, this substantial layby was approaching capacity by the time I got there. This is such a popular walk that there were easily hundreds of people going up with me. 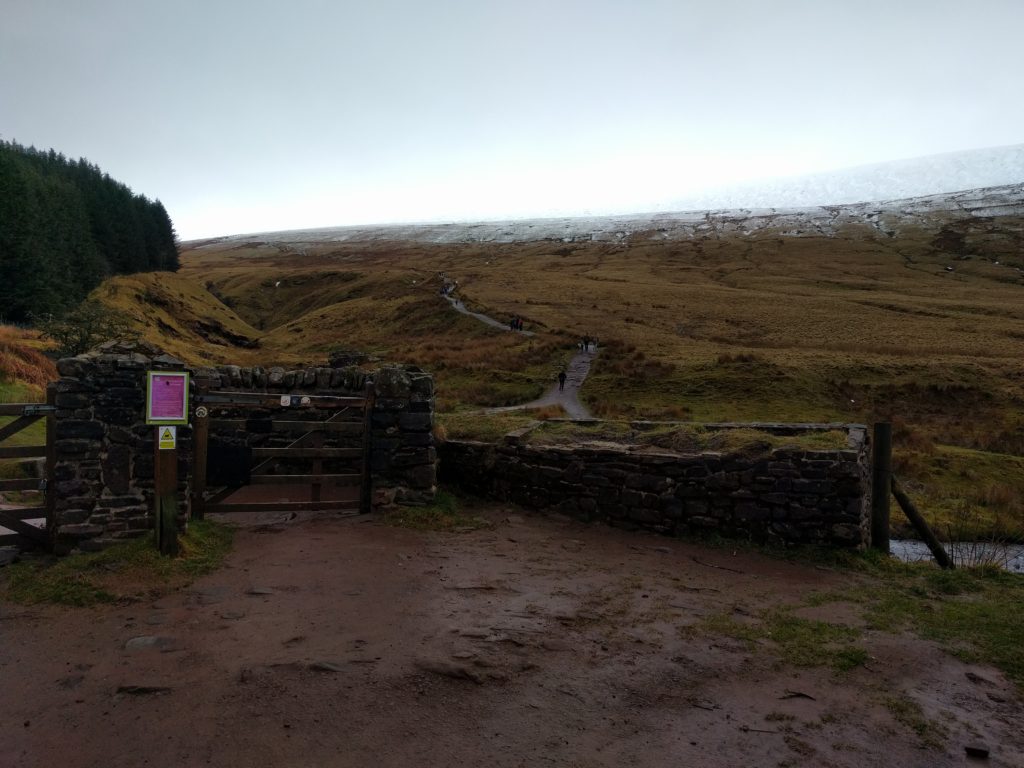 The start of the path up Pen Y Fan

This was as well, because the weather had made the normally easy, and well-maintained, National Trust footpath a bit challenging. Those in trainers were certainly slipping a lot and I was very glad to be wearing YakTrax – something that had been recommended to me only a few days before, and they were brilliant! 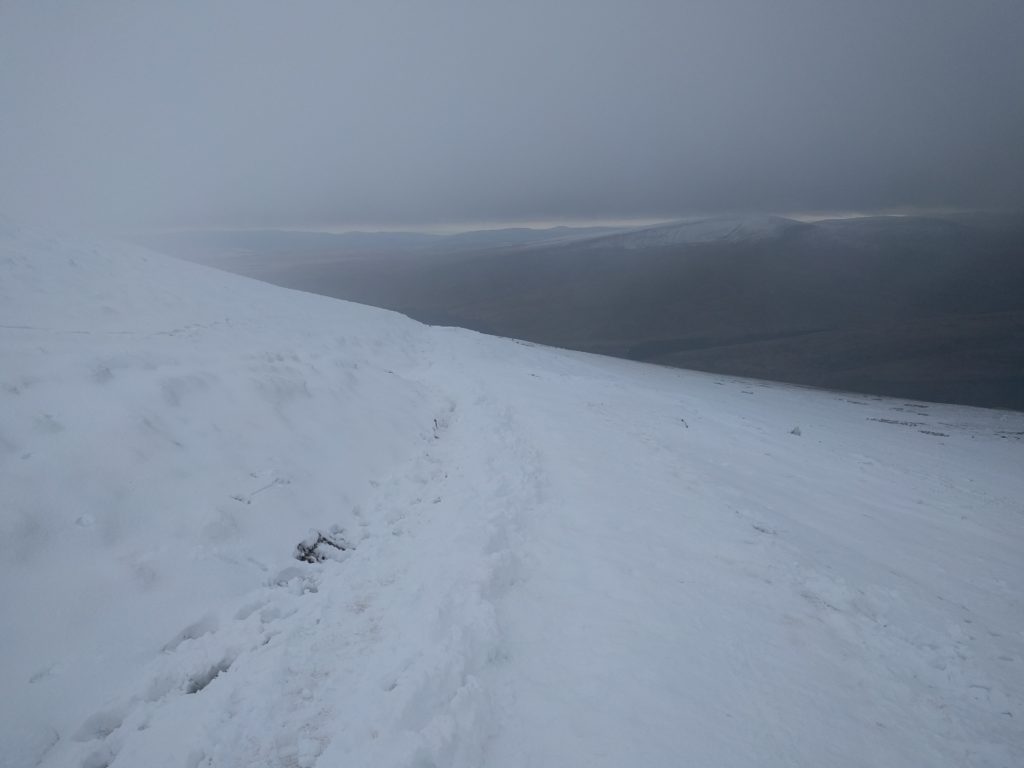 The upper part of the path under snow

The photo below is the only one I managed to get with nobody else in it. In practice, I was on the hill with lots of other people, and this, combined with the wind chill, made operating a challenge. I started by calling on 2m, but could only manage 2 QSOs there. So, it was time for HF: I set up my SOTA pole at half-height, leaving the ends of my 30m dipole dangling, knowing I would be weak, but hoping that would be adequate to get the magic four QSOs total. It was, and after completing with another 4 people on 30m, I got off the hill as soon as possible. 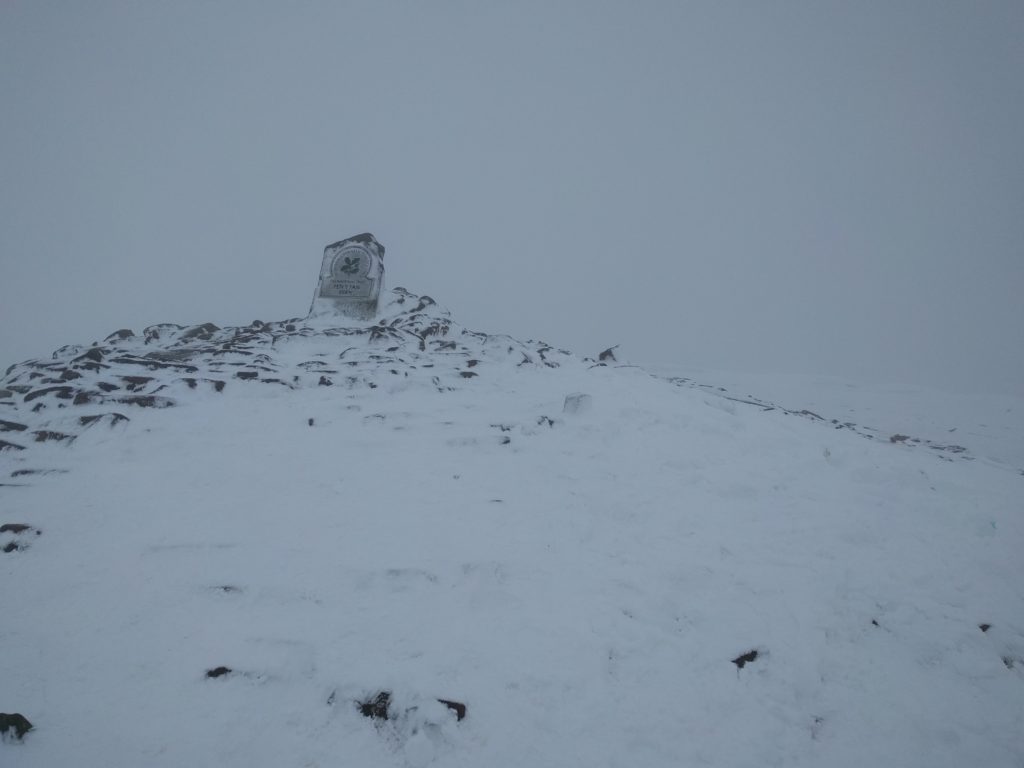 I had planned to activate the other SOTA qualifying hill in this valley, Fan Fawr (GW/SW-005) on the same day, but looking across at it from Pen Y Fan, it clearly had as much snow on it. I didn’t know Fan Fawr at all, but knew there would not be such a good, distinguishable path, so I opted to leave that one for another day, and to head instead back towards the campsite, so I could activate Mynydd Llangorse, which I hadn’t done yesterday.

And so it was that I found myself parking in the same place as 24 hours previously, but this time to head up in the other direction to the 2-point Mynydd Llangorse.

From the road, it looks as though the two Mynydds are about the same height and steepness as each other, but this is an illusion. Mynydd Llangorse does rise sharply at first but it isn’t so steep as to need those slippery footholes that I’d struggled with yesterday. Instead, the path winds around the fort at NGR SO160278 (though you wouldn’t know it was a fort without the map’s indication – too little remains for a non-expert to tell), and soon levels out to another flat-topped hill with some lovely views looking back towards Pen Y Fan. 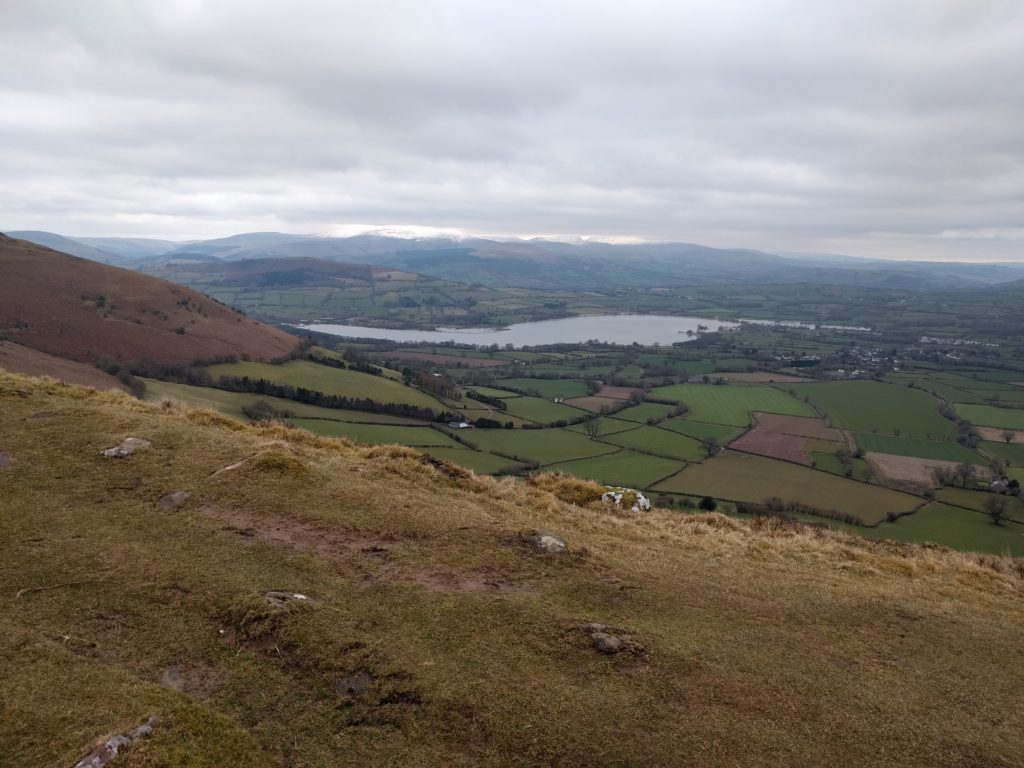 View from the flat top of Mynydd Llangorse

The flat top means there’s a large activation zone for SOTA and I set up a little away from the summit, instead choosing the Cairn at the point where two paths cross at SO1592567. In doing so, there was more space to set up my dipole without having to wade through too much heather.

With no rain, and without the snow covering at this altitude, this was a much more pleasant activation, and I took my time making the 10 QSOs on 30m, before heading back to the car. The ascent took about 40 minutes, and the descent about 30 minutes.